14 Best Things to Do in Saratoga Springs, NY

Saratoga Springs has been a well-known resort location for many years. The city’s slogan, “Health, History, and Horses”, sums it up best. Spa City offers much more than just the healing waters and thrilling horse races that attract many people.

It is a lovely, laid-back spot, located just north of Albany, in the East of New York State. There are many beautiful green parks, springs, and gardens scattered around, but the vibrant Broadway is filled with eclectic art galleries and swanky boutiques, as well as attractive historical buildings.

There are many wonderful museums in the town, and you can also visit scenic Lake George or the Adirondacks. Saratoga Springs is home to some of the best things to do.

The well-curated displays, which were established in 1986, cover all aspects of classical ballet and jazz, as well as critics, composers, and choreographers. Cool artifacts, installations and costumes that represent famous dances are on display wherever you go.

Visitors can walk around the Hall of Fame, watch short films and admire the artist’s movements. Here you will find biographies, portraits, and biographical information about renowned people like Fred Astaire and Lucia Chase. 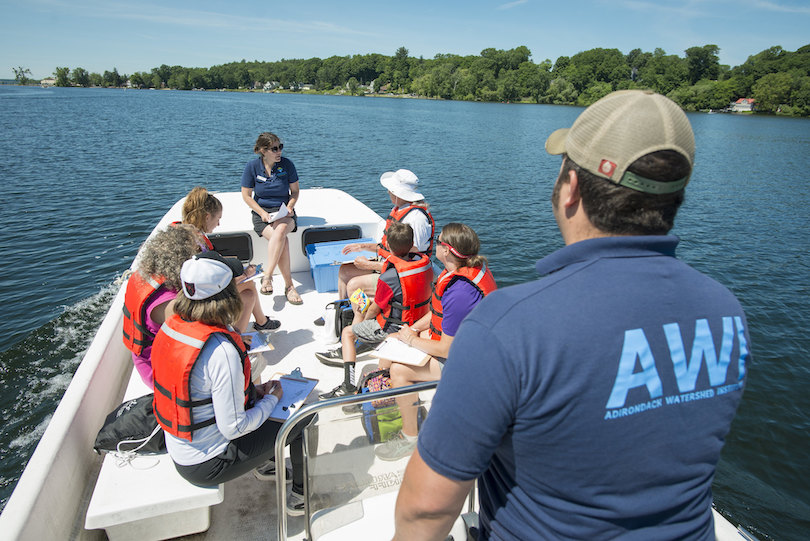 Saratoga Lake, which offers watersports and exciting outdoor activities, is very popular, especially during summer. Every year thousands of boaters, swimmers and kayakers flock to the stunning body of water located just southwest of the city.

It measures approximately 4.5 miles long and its mirror-like waters measure 1.5 miles wide at their broadest point. Unfortunately, much of the scenic shoreline is privately owned so most residents enjoy jet ski, wakeboard, and tubing on its sparkling surface. There are many marinas and rental boats available for fishing or sailing.

Waterfront Park offers a variety of activities. You can relax on the grass or hike along its shaded paths. Enjoy a picnic and take in breathtaking views of the lake. 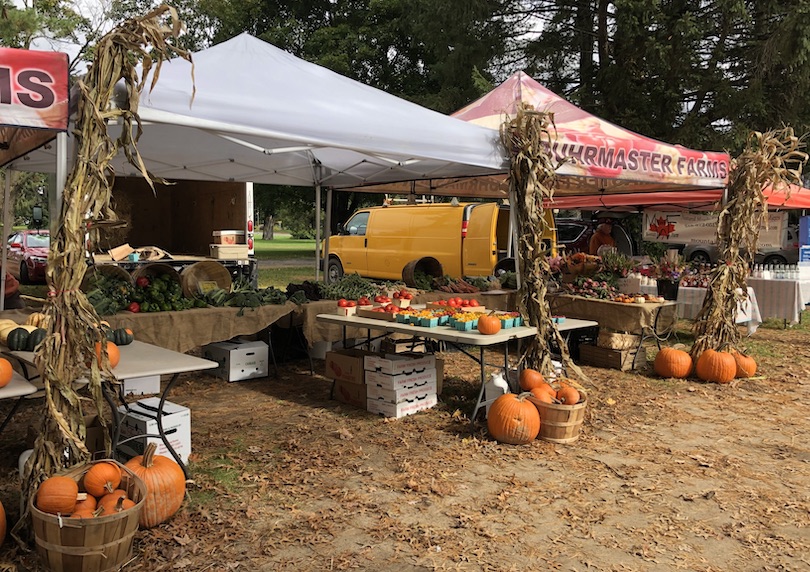 The bustling Saratoga Farmers Market is located in the northern outskirts. It is home to dozens of stands and vendors selling everything, from fresh fruits and vegetables to handmade arts and crafts to artisan food products.

The original concept was started in 1978 by a few local farmers. Since then, there have been more than 50 merchants and live music. It is truly a delight to stroll past the laden stands. The fresh baked goods aroma wafts through your nostrils and friendly food vendors encourage you try their products.

The open-air market has become a popular attraction for both tourists and locals due to its appealing atmosphere and wide selection of handicrafts, food and drink. The market is located outside Wilton Mall on Wednesdays and Saturdays in the summer, and only on Saturdays in winter. 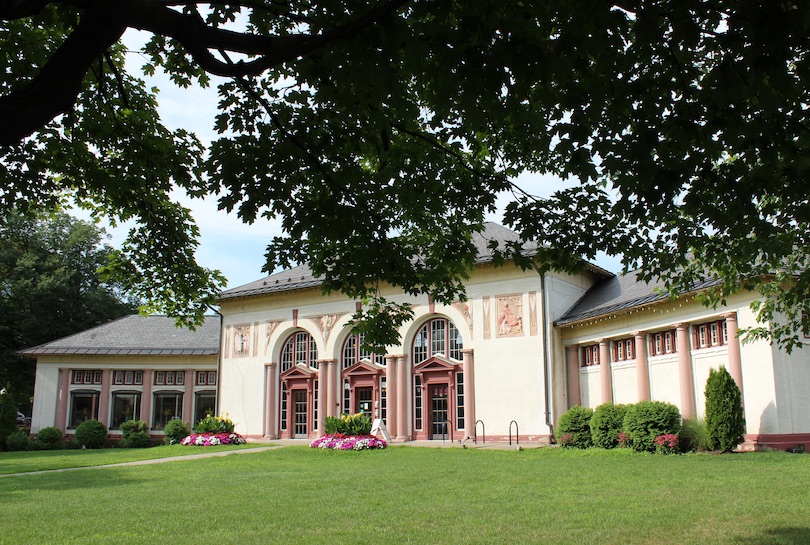 It is worth stopping by the Saratoga Springs Visitor Center before you continue your journey around the city. It provides information about all of the tempting tourist attractions, restaurants, and entertainment options. Additionally, it displays exquisite architecture and lush greenery all around.

The 1915 Beaux Arts building, also known as “The Drinkhall”, was once the trolley station of the town. The central block, which is stuccoed, has three distinctive bays and a decorative frieze. However, the large wings on either side of it are simpler.

The high vaulted barrel ceiling of the interior overlooks displays stuffed with information about what’s happening in the area and places to visit. Ask the staff for insider tips and advice. 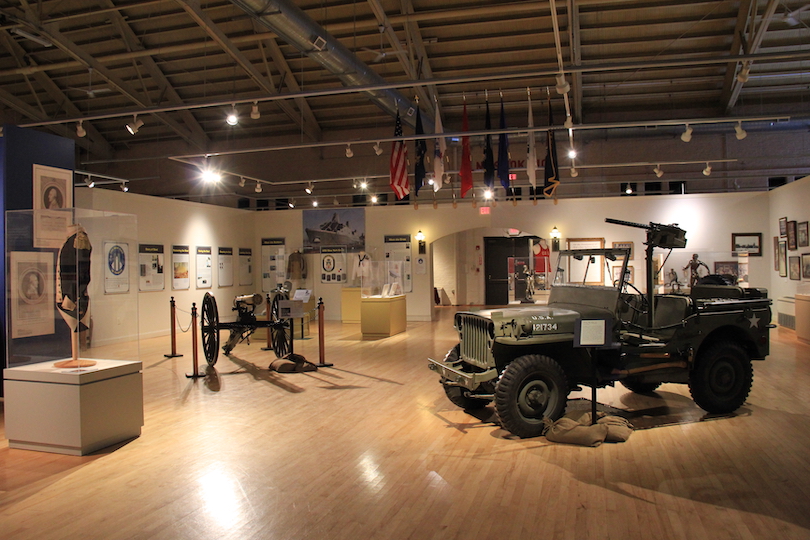 The New York State Military Museum is just two blocks from the magnificent sight. Its massive castle-like structure is instantly recognisable and houses an incredible collection of uniforms, weapons, artifacts, and artworks.

The museum was opened for the first time in 2002. It occupies an impressive red brick armory dating back to 1889. The museum’s tall towers and camouflaged tanks at the entrance immediately grab your attention. However, you will find many other fascinating exhibits within. They not only cover the Civil War, Indian Wars, but also those from Iraq and Afghanistan.

You can find medals, maps and flags in the galleries. There are also short films that highlight important historical events. 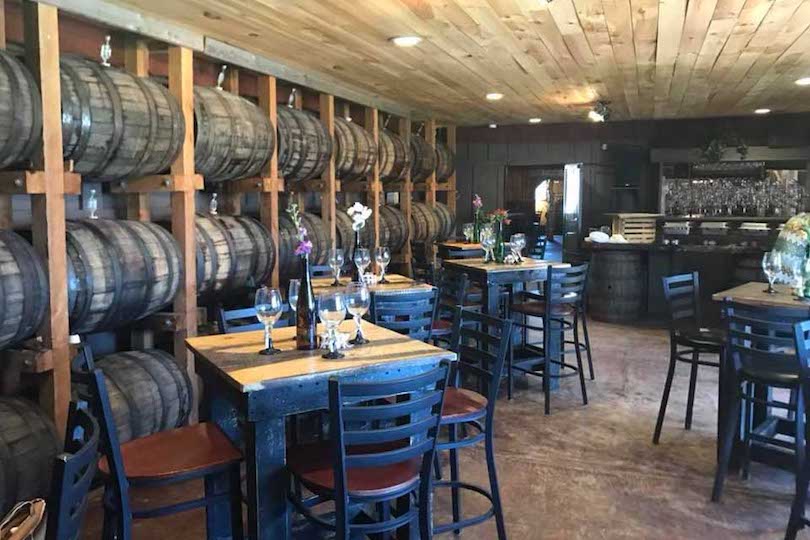 You’ll find the cozy and intimate Saratoga Winery if you drive just ten minutes west of town. Visitors can taste the finest grapes from the Finger Lakes region at this rustic, romantic location.

Rich and Tara Nimmo, the proud owners of this wine bar have received widespread praise for their unique and cozy atmosphere. You can sit down at the Adirondack-style tasting bar to sample delicious wines. Or, enjoy delicious cocktails and local beer on the outdoor patio.

The winery also offers some delicious dishes. Live music is available every Friday and Saturday with laughter, joy and great times. 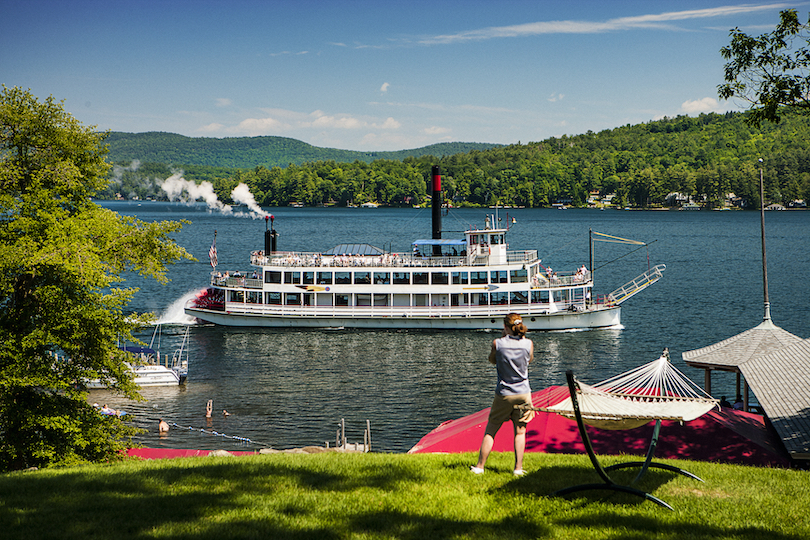 It is only half an hour drive from Saratoga Springs so it’s worth a visit to Lake George. It is hidden away in the Adirondacks and offers beautiful scenery, nature, and all sorts of outdoor activities.

It is a popular tourist spot year round. The stunning boating, kayaking, and other watersports make it a top choice for New Yorkers as well as tourists from out of state. You can enjoy hiking, biking and horseback riding along the scenic shoreline lined with trees. There are also marinas and campsites scattered around.

You can also take a sightseeing cruise around 170 islands. There are many shops and restaurants in this town. Lake George has many hotels, golf courses and a family-friendly amusement area. 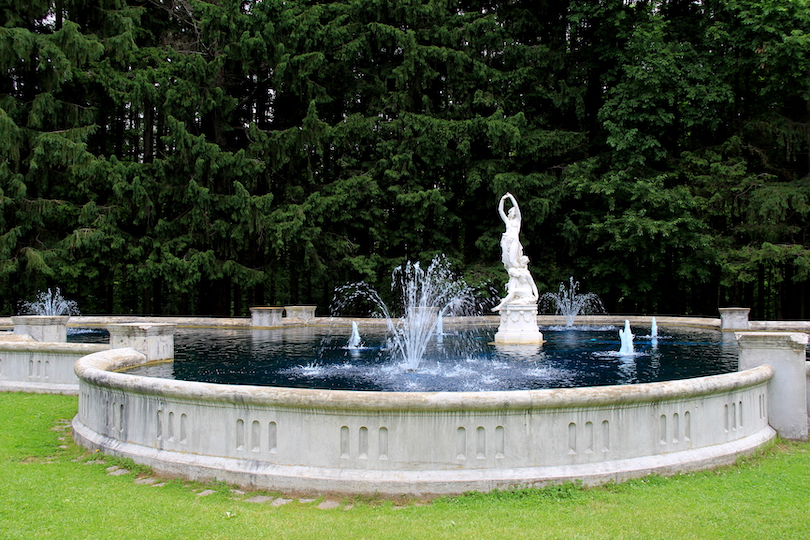 The beautiful Yaddo Gardens are a picturesque spot to stroll around. They also overlook the Saratoga Race Course. It is part of an immense estate, which serves as a retreat for writers and artists. The stunning fountains and flowerbeds make it a joy to visit.

The serene, secluded Yaddo was founded in 1926 by Spencer Trask, a wealthy financier and Katrina Trask, a writer and wife. Since then hundreds of American artists have sought refuge there. Many have had great success without having to deal with the daily grind.

It is home to stunning statues and water features, as well as fragrant rose gardens. They are modeled after European classical gardens and cover an enormous area. Sundials, perennials, and rock gardens can also be found on the lower and upper terraces. 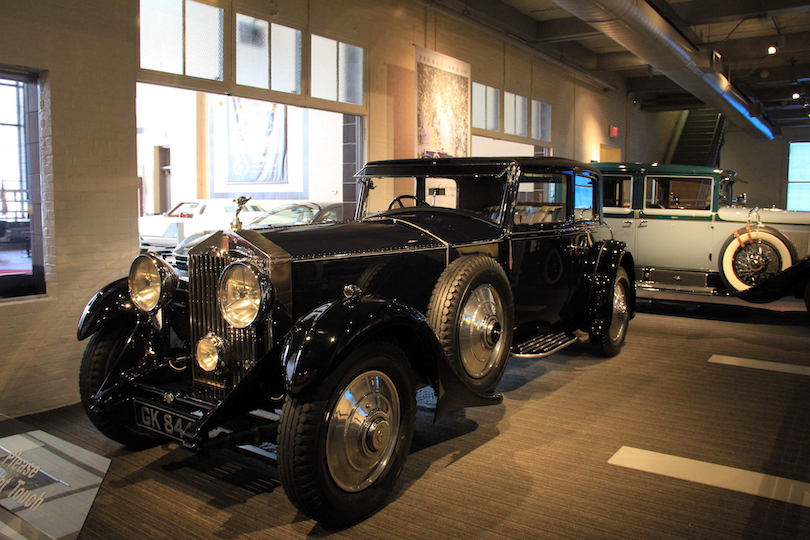 The Saratoga Automobile Museum is a must-see for all motor enthusiast. It houses many vintage cars and racing cars. It is located within Saratoga Spa State Park and contains many artifacts, exhibits, and more.

It makes perfect sense that Saratoga has its own automobile museum, as New York used to be home to over 100 car makers. The museum’s fascinating displays provide a unique look into the Empire State’s rich automotive heritage and auto industry. The exhibits also feature artwork that combines cars and racers, or focus on women pioneers in automobile manufacturing.

It is worth stopping by the many corvettes, jaguars or bugattis on display at once.

5. National Museum of Racing and Hall of Fame 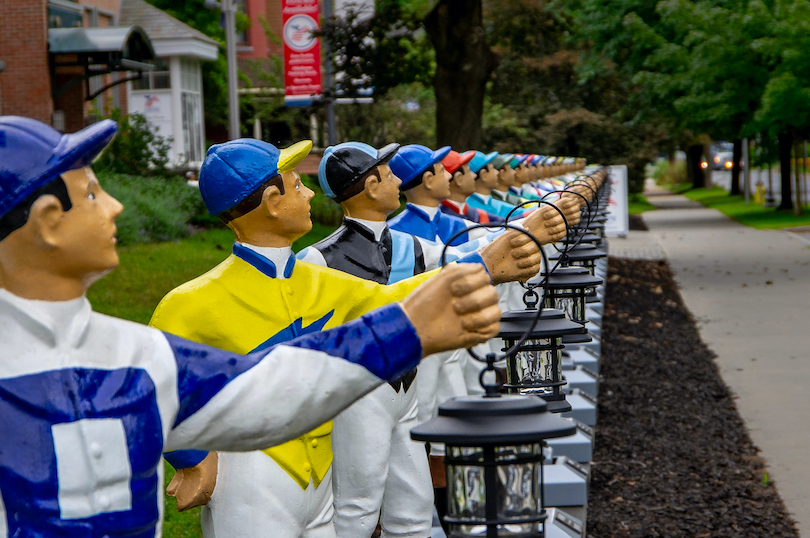 A fine museum honoring the accomplishments of American Thoroughbred jockeys, racehorses and trainers is located just a few hundred yards from the historic race track. The National Museum of Racing & Hall of Fame offers information about the development of this sport through the centuries.

The massive, 1951-built complex is located on Union Avenue. Its brightly-painted statues depict jockeys are a drawcard. The extensive galleries and exhibits inside the complex provide a glimpse into the history of American racing, including its foundation in colonial times, expansion following the Civil War, and current status.

You can browse the Hall of Fame, which houses many artifacts, artworks, medals, and trophies. You will be introduced to legendary thoroughbreds, such as Secretariat and Seabiscuit. Also featured are famed jockeys like Eddie Arcaro or Fred Burlew.

4. Take a look at Broadway 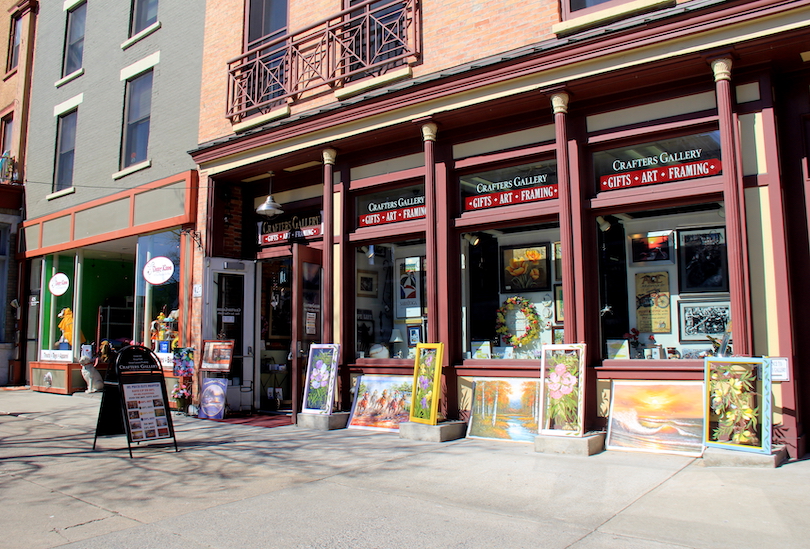 Broadway, the heart of town is home to many shops, restaurants, bars, and cafes that offer a wide range of services and products. It is over one mile long and borders many beautiful old buildings, which display a variety of architectural styles.

It runs through central New York City, from Congress Park to the Saratoga Springs Visitor Center. Charming local restaurants and eclectic art galleries are just a few of the many attractions that you will find, along with chic antique shops and stylish boutiques. It also includes a number of popular nightlife venues and comfortable hotels.

There are so many tempting restaurants and establishments that you can choose from. It is easy to see why Broadway is Saratoga Springs’ main destination for shopping, dining, and going out. 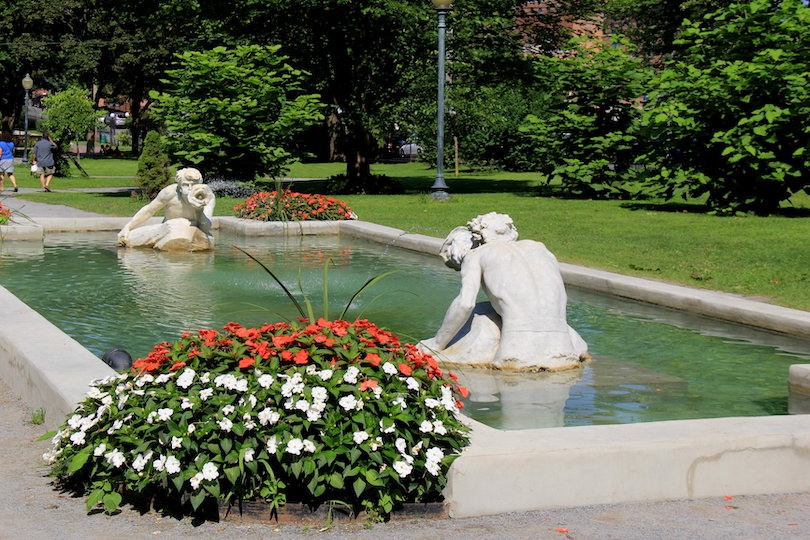 Congress Park is a short distance from downtown, but its lush green spaces are a far cry from the bustle and hustle of city life. You can enjoy the stunning surroundings, as well as stopping by the many springs which gave the city its name.

The site used to be a resort hotel, casino and bottling factory. It was then transformed into a park in 1913. The former buildings were demolished but the second building, built in 1870s, still exists. It houses the Saratoga Springs History Museum.

You can also see Congress Spring, the beautiful Greek Revival-style pavilion protecting it and a number of fountains, lakes, and a charming 120-year-old-old-carved carousel. 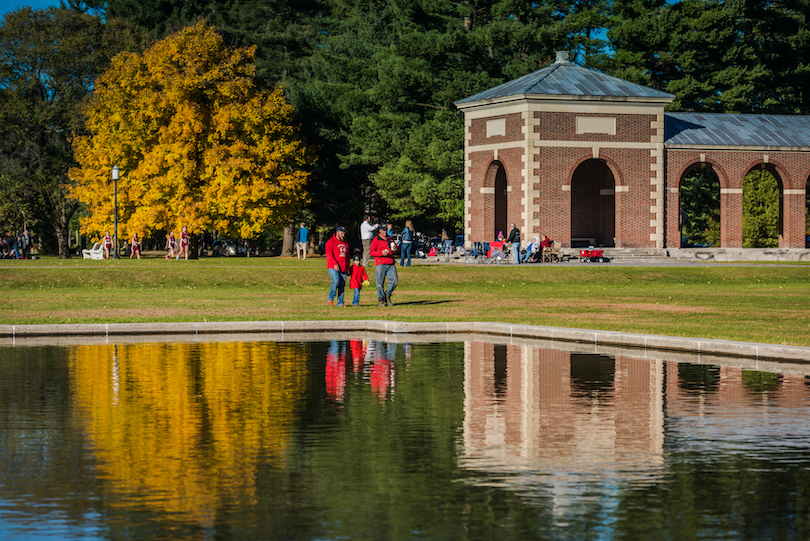 People have been drinking from the springs for centuries, if not even millennia. They love their warm waters and soothing effects. The Queen of Spas was once a luxurious retreat for the wealthy and well-known. Now, there are many pools available for visitors to enjoy. The bathhouse’s classical architecture is beautiful, but the pretty pathways and picnic areas make it a pleasant place to walk around.

You can not only bike and hike around, but you also have the option to play tennis on their courts. It also houses the Saratoga Performing Arts Center, as well as the opera. 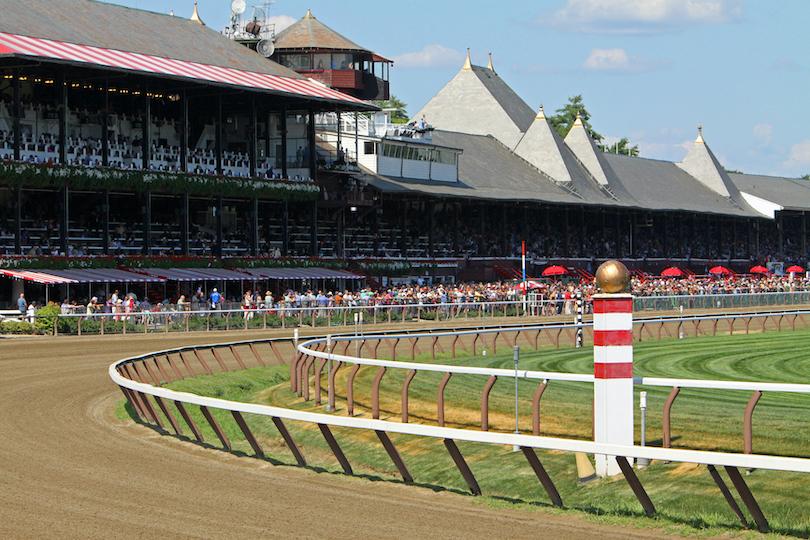 A thrilling race at Saratoga Race Course is the highlight of every holiday. It is one of the most prestigious racetracks in America, and has been host to high-stakes thoroughbred horse races ever since 1863.

The dirt and turf tracks lie on the southeast outskirts Spa City. They are overlooked by historic grandstands. There are many suites and seats that offer great views of jockeys and horses racing at the track. Restaurants and bars in the historic venue have windows that face the track so it’s easy to see the racing action while you eat.

It is often ranked among the top sporting grounds in the world. The summer season sees events taking place six days per week. You can also enjoy the thrilling atmosphere and place your bets, take a tour of the paddocks, or visit the Hall of Fame nearby.

A Map of Things to Do In Saratoga Springs (NY)

Saratoga Springs is known as “the Queen of the Spas.” It has a rich heritage as a health resort and gambling center for much of the 19th and 20th centuries. During the Paleozoic Era, a series of faults or cracks split the underlying bedrock, creating fissures through which water forced its way to the surface.

Saratoga is an adaptation of a Native American word from the Mohawk language. It was the name of Indian hunting grounds located along both sides of the Hudson River. According to the town’s history, it derives from se-rach-ta-gue, meaning ‘the hillside country of the quiet river’.

Saratoga is an adaptation of a Native American word from the Mohawk language. It was the name of Indian hunting grounds located along both sides of the Hudson River. According to the town’s history, it derives from se-rach-ta-gue, meaning ‘the hillside country of the quiet river’.

As we mentioned, Saratoga Springs is a pretty amazing destination for all-year-round, and it’s for that reason it has stayed a super popular vacation destination (especially for those who live in NYC and want to get out of the city).02-Feb-2021