Frankfort’s 13 Most Popular Things To Do 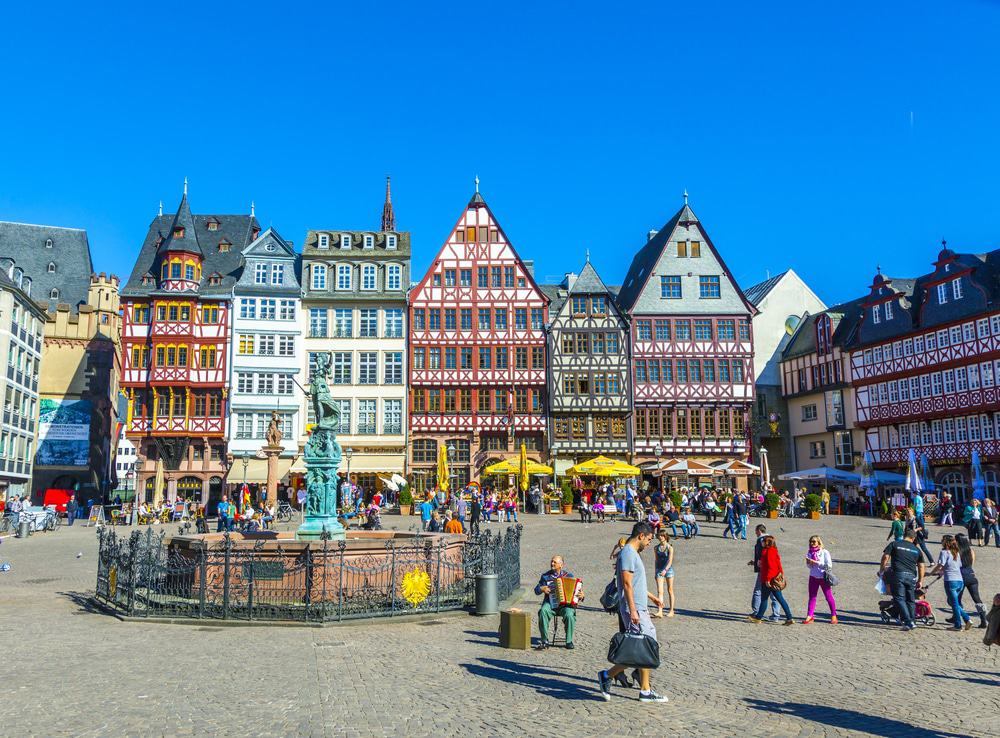 Nestled away between the state’s two largest cities of Lexington and Louisville is Kentucky’s capital Frankfort; a lovely, laidback place to spend some time. Home to lots of antebellum-style buildings, museums and prominent public institutions, it straddles the banks of the Kentucky River.

While there are plenty of wonderful waterfront areas, parks and nature spots to explore, many tourist attractions in Frankfort relate to the state’s seat of government. Both its old and new capitol buildings attract lots of visitors as do its various monuments, memorials and governor’s mansions.

Aside from sightseeing and sampling some stiff drinks in its distilleries, other things to do in Frankfort can be found in its small but happening downtown. Here you’ll find excellent restaurants, cool taverns and unique boutiques with interesting historic sights and attractive old buildings wherever you look. 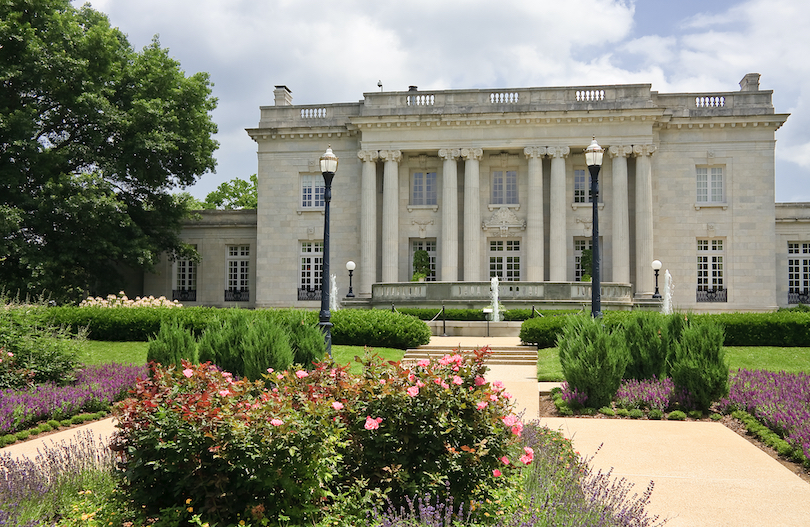 Just one of the capital’s many impressive and important buildings is the grand Governor’s Mansion which overlooks the winding Kentucky River. Set right next to the new state capitol, it lies amidst lush grounds and gardens with tours taking you all around its elegant interior.

Built between 1912 and 1914, it exhibits some exquisite Beaux-Arts architecture which is actually based on Marie Antoinette’s summer home at Versailles. For just over a century now, it has acted as the official residence of the Bluegrass State’s governors and their families.

Its French neoclassical-inspired interior is just as striking as fabulous furnishings and period pieces decorate its vast halls and rooms. As you explore the majestic mansion, your expert guide will point out particularly fine features and explain more about the history of the house and its governors. 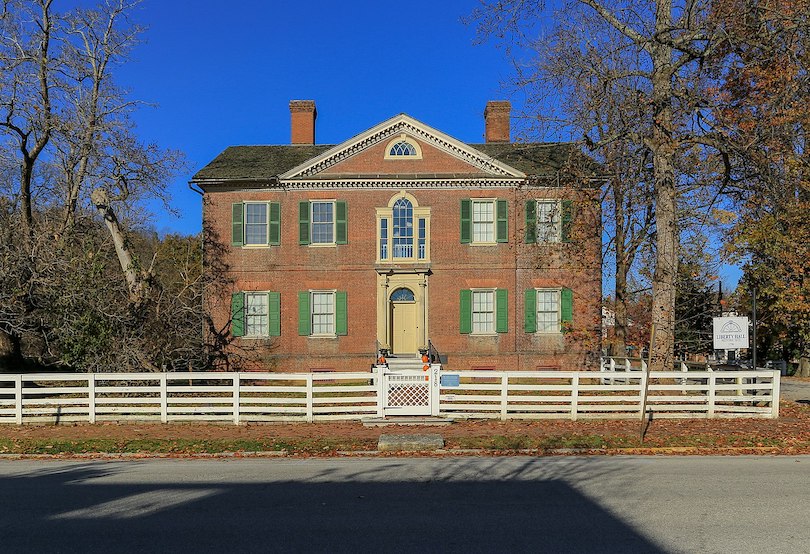 Located just a short stroll west of both downtown and the Old State Capitol is the charming Liberty Hall Historic Site. At the National Historic Landmark, visitors can explore two attractive old stately homes and their gorgeous gardens.

The former home of John Brown, Kentucky’s first senator, the two-storey Liberty Hall dates to 1796 and sports a fantastic Federal-style facade. Next to it is the equally arresting Orlando Brown House which he had built for his son just a few decades later in a refined Greek Revival-style.

At the historic site, guests can take tours of both houses and wander around their expansive grounds that overlook the Kentucky River. Their ornately decorated interiors highlight how wealthy families in the 1800s lived while other exhibits cover the poor enslaved people who worked for them. 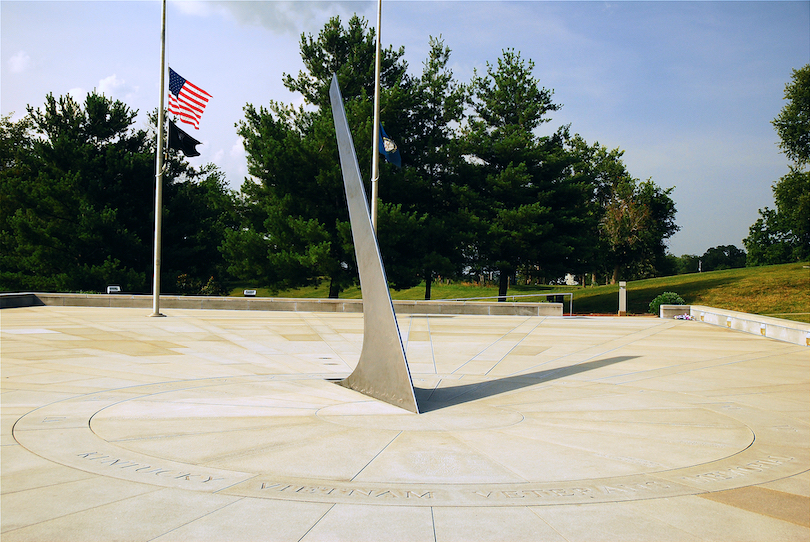 A very poignant place to visit, the Kentucky Vietnam Veterans Memorial commemorates the 1,103 soldiers from the state who lost their lives during the war. Distinctive yet dignified, it lies in a scenic spot overlooking the state capitol and city down below.

Impressively enough, the shadow created by its gigantic sundial actually points to each individual’s name on the exact anniversary of their death. Thanks to this ingenious architectural feature, each veteran pretty much has their own personal memorial day.

Aside from paying your respects and taking in the peaceful nature of the plaza, you can snap photos of the stunning site and amble about the silent hill. Undoubtedly one of the nation’s most unique and effective memorials, it is definitely well worth checking out if you have the chance. 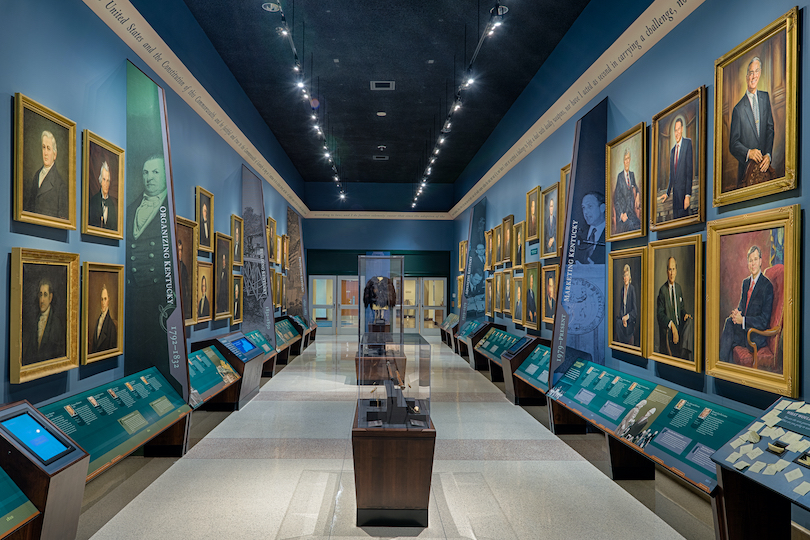 If you’re interested in learning more about the city and state’s past, then the Thomas D. Clark Center for Kentucky History is simply a must. At its sizeable campus in downtown, you’ll find innumerable artifacts and exhibits that focus on its rich culture and nature, famous figures and influential events.

While the Kentucky Historical Society has existed since 1835, it took until 1999 for the museum’s massive modern building to open. Its displays, photos and specimens remarkably cover over 12,000 years of history with everything from bourbon and baseball bats to horse racing memorabilia and sports cars on show. A particular highlight though is seeing all the portraits in the Kentucky Hall of Governors.

As educational as it is entertaining, the superb museum takes you from prehistoric times right up til the present. After having learnt about Kentucky’s Native Americans, early pioneers and politicians, make sure to stop by the Old State Capitol right next door. 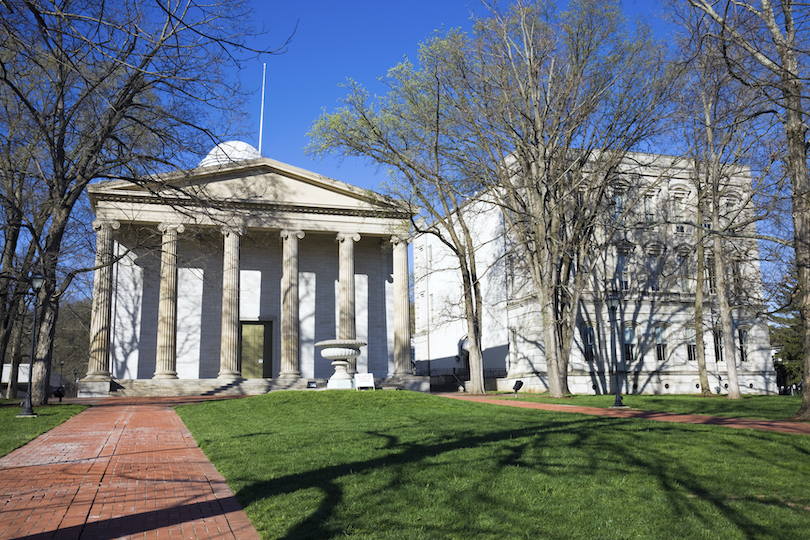 Situated right in the heart of downtown is the incredible Old State Capitol which served as the seat of government from 1830 to 1910. Actually the Commonwealth of Kentucky’s third such structure, it boasts some brilliant Greek Revival architecture with lush trees and lawns lying all around it.

Now preserved as a National Historic Landmark, the capitol is fronted by six colossal columns that are very reminiscent of ancient Greece. During its heyday, politicians would fiercely debate subjects such as slavery, the Civil War and women’s rights in its hallowed halls.

On tours, you’ll learn about its architecture and artworks and the important personalities who shaped the state’s politics in the nineteenth century. Among the building’s striking features are its wonderful rotunda and self-supporting staircase. 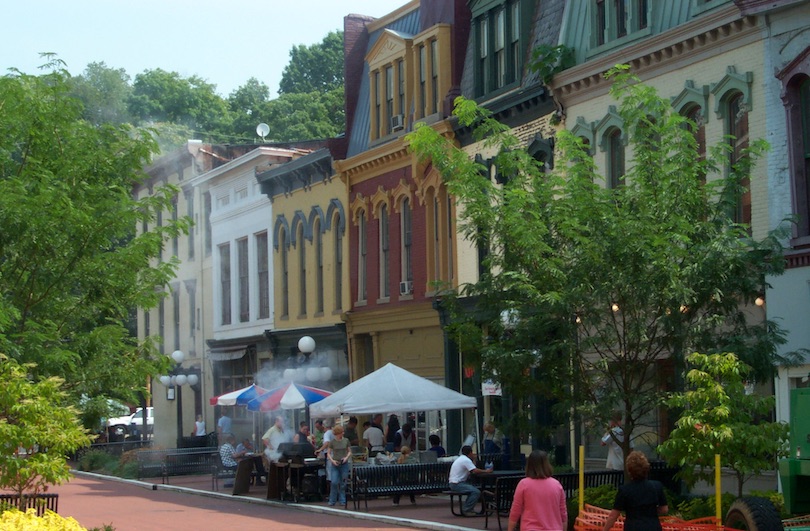 A fun and fascinating area to explore, Downtown Frankfort is packed with age-old historic sites and impressive cultural landmarks. While many of its beautiful buildings date back centuries, pockets of life and bustling businesses can be found here and there.

Nestled in a bend of the Kentucky River, the historic district is home to streets and streets of elegant old antebellum-style houses. While some are now preserved as museums, others contain cozy cafes and lovely local restaurants. A couple of excellent distilleries and taverns are also dotted about.

Downtown’s main appeal however is its wealth of historic attractions. These include not just the Old State Capitol and Liberty Hall but the Capital City Museum and Old Governor’s Mansion too. 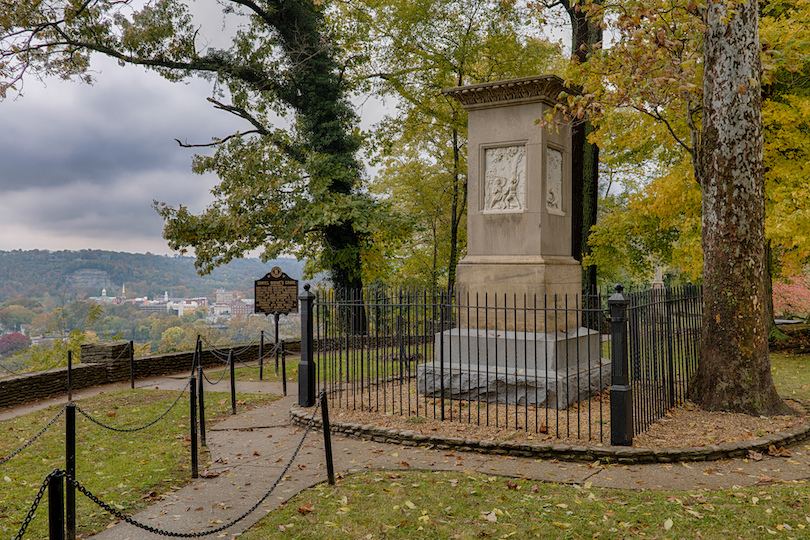 Just a short walk to the southeast of the center is yet another of the city’s innumerable historic sights to see. Overlooking both the city and river below, the Daniel Boone Burial Site lies within the leafy, green Frankfort Cemetery.

One of America’s first frontiersmen and folk heroes, Daniel Boone is known for both exploring and settling Kentucky back in the 1760s. This was when it was well beyond the borders of the Thirteen Colonies and Native American Indian attacks were a constant threat.

Although imperfectly remembered, Daniel Boone remains an iconic figure around which countless myths and legends swirl. At the memorial to him and his wife, you can read more about his life and legacy, snap photos of the site and take in the fine views over the valley. 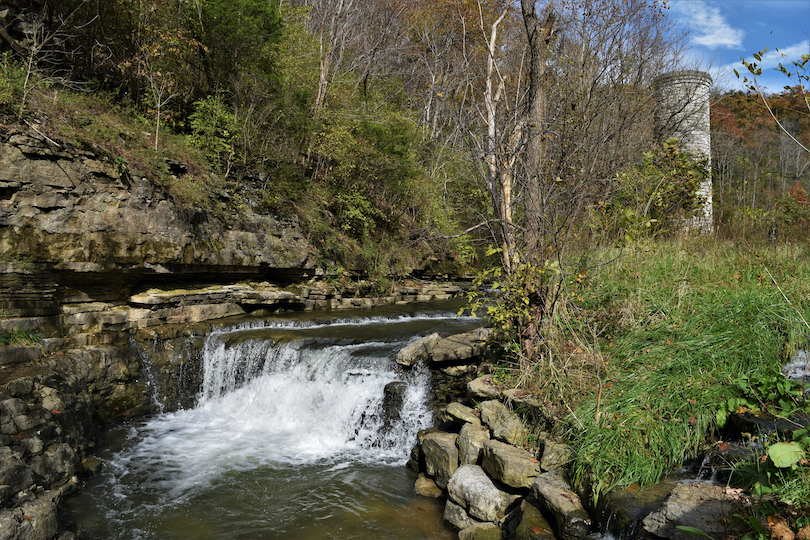 Home to lots of stupendous landscapes, scenery and nature, Cove Springs Park lies on the northern outskirts of town. A very peaceful and picturesque spot, it contains several sparkling waterfalls with all kinds of fun outdoor activities being on offer.

Originally the site of an old waterworks, the park now encompasses everything from meadows and ravines to woods, wetlands and waterfalls. Some centuries-old remains of a walled spring, dam and overflow tower are still visible amidst all the dense undergrowth.

Besides checking out these historic sights and seeing the pretty springs and falls, visitors can splash about in its streams or enjoy a picnic along their banks. Some delightful hiking and biking can also be had along the miles and miles of trails that meander their way about the massive park. 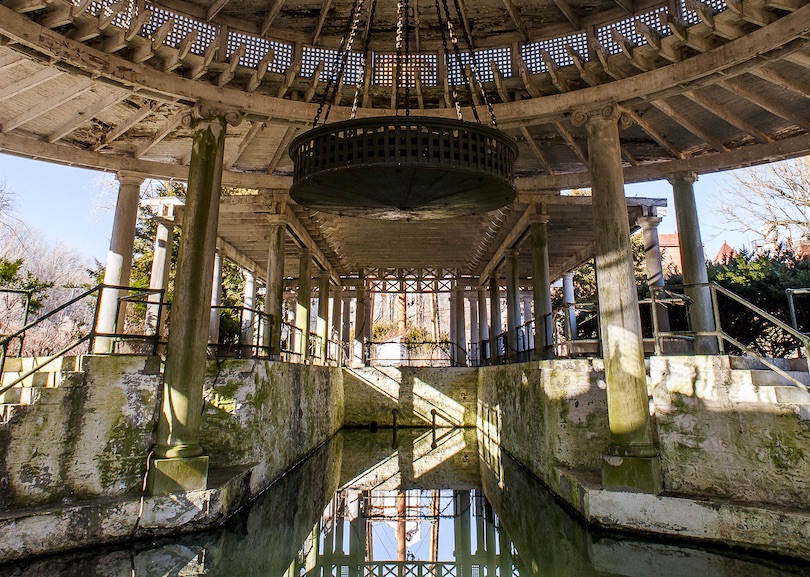 On the opposite side of Frankfort, you can find the absolutely incredible Castle & Key Distillery. At its unique site, you can sample some stiff spirits and tasty cocktails with tours taking you all around the expansive estate.

Built back in 1887, the scenic property features a real European-style castle, a classical springhouse and a quiet sunken garden. While Prohibition put paid to its distilling days in the 1920s, the current owners resurrected and reopened it just under a century later in 2014.

Since then, it has been one of Frankfort’s top tourist destinations due to its delicious drinks, serene setting and interesting architecture. While seeing how their bourbons, gins and vodkas are produced is a cool experience, ambling about its relaxing grounds is just as pleasant. 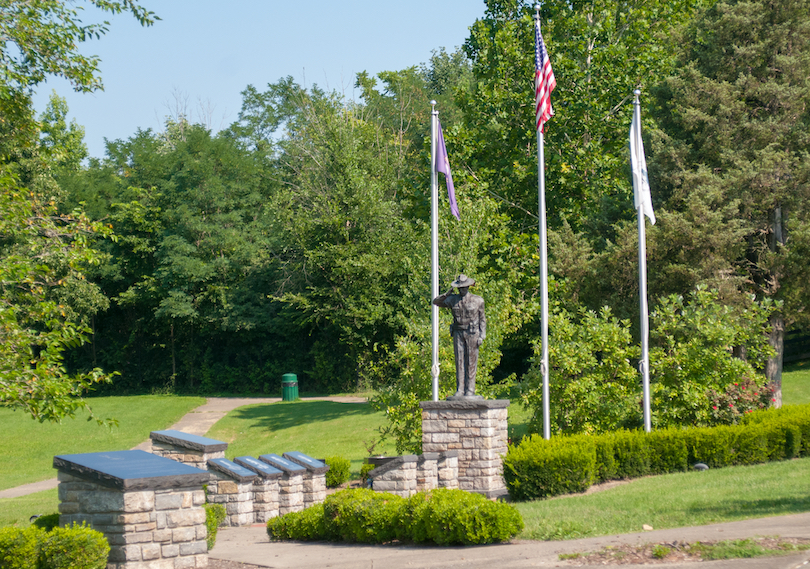 Another idyllic and unmissable place to head is the Salato Wildlife Education Center on the western limits of Kentucky’s capital. Here you can see a menagerie of amazing animals both large and small, either in its inside exhibits or amidst all the diverse habitats outside.

The center’s sprawling site protects a wide range of ecosystems with marshes and streams lying next to prairies, forests and even mountains. As you explore its enclosures, you’ll come across everything from deer and bears to bison, bobcats and bald eagles.

On-hand are friendly and knowledgeable rangers who are more than happy to explain all there is to know about the animals and their native habitats. Asides from seeing the terrific snakes, turtles and owls inside, you can fish in its ponds and hike about its nature trails. 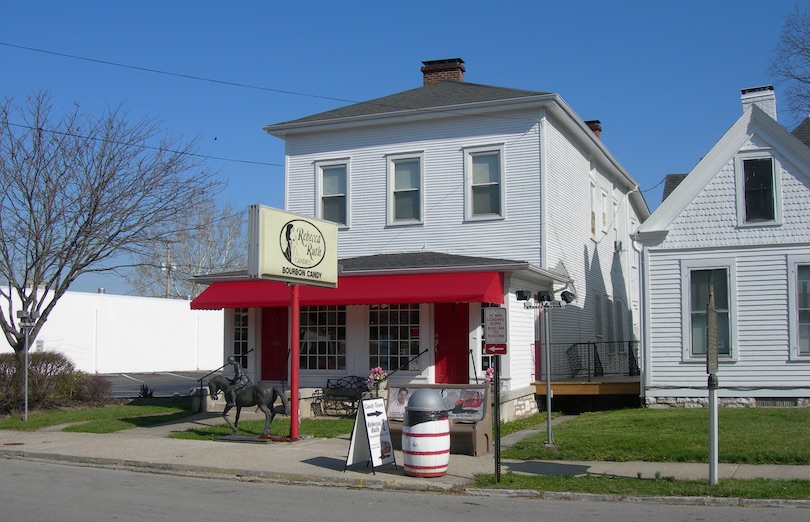 If you have a bit of a sweet tooth, you may find it hard to pass up on a tasty tour around the Rebecca Ruth Candy factory. As well as seeing how their world-famous ‘bourbon balls’ are produced, guests can also learn more about the succulent treat’s origins in the adjoining museum.

Way back in 1919, two former schoolteachers, Ruth Booe and Rebecca Gooch, began the profitable candy business by mixing chocolate with the state’s best-loved liquor. Since the birth of the famous ‘bourbon balls’, they have branched out into various caramels, cremes and other confectioneries.

Four generations later, it is still going strong with thousands visiting the iconic Kentucky institution each year. On top of seeing all their antique and modern candy-making equipment, visitors can shop for gifts in the store or sample some of their sweet creations. 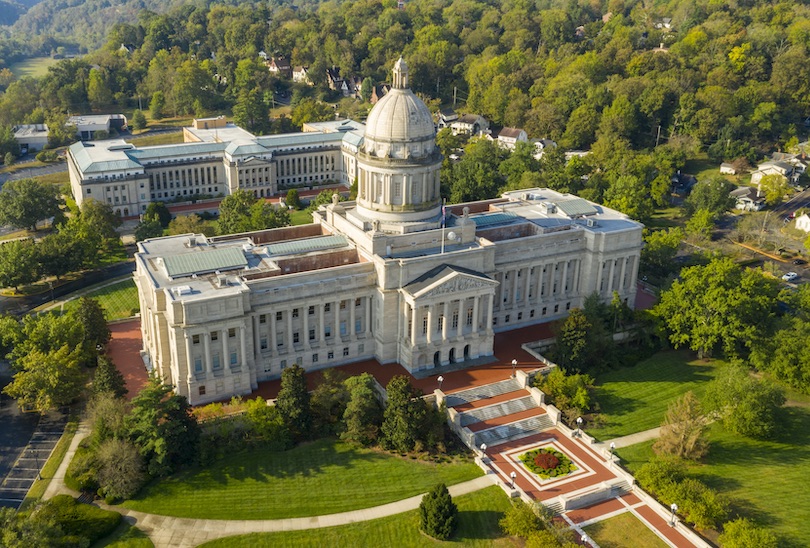 Undoubtedly the city’s most beautiful building is its Beaux-Arts New Capitol Building. Since 1910, it has acted as the state’s seat of government with informative tours taking you all around its opulent interior and immaculately groomed grounds.

Built over the course of five years, the much larger building with its ginormous dome and fetching facade replaced the Old State Capitol north of the river. Inside is just as appealing as refined murals, portraits and artworks decorate its grand chambers and rooms. One of the capitol’s standout sights is its lovely rotunda which is flanked by huge halls lined by massive marble pillars.

On tours, you’ll learn about the history of Kentucky’s numerous capitol buildings, its governors and politicians. Afterwards, you can stroll about its gorgeous green grounds which are dotted with super statues, flowerbeds and commemorative plaques. 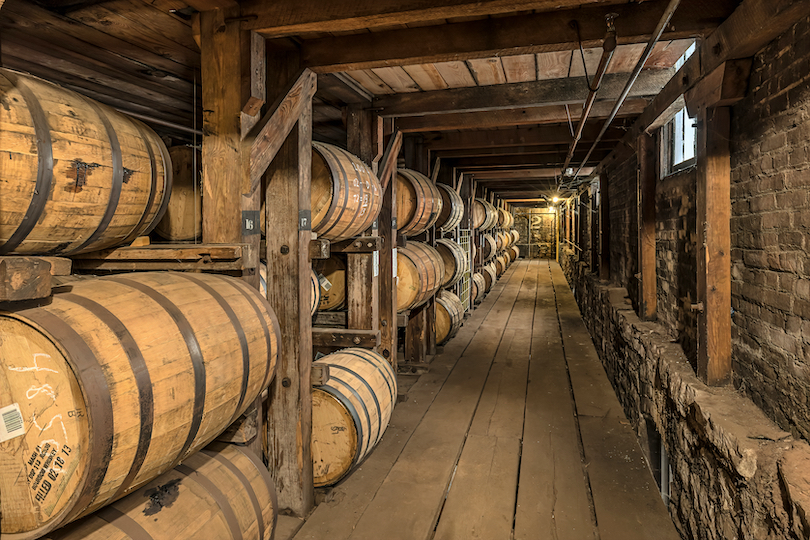 Considered a must by many, the Buffalo Trace Distillery has now been producing brilliant bourbons for well over two centuries. At its historic old facility just north of downtown, you can taste award-winning whiskeys and tour about its charming grounds and production line.

Founded in 1792, it claims to be the oldest continuously operating distillery in the United States. Its ruddy red brick warehouses, water tower and master distiller’s residence certainly look the part with lush lawns lying all around the attractive old structures.

Besides touring around their state-of-the-art facilities and enormous aging area, you can also sit and sample some sumptuous spirits in its atmospheric tasting room. In addition to knocking back some bourbon, there is also an arboretum, botanical garden and gift shop to visit at the National Historic Landmark.

Map of Things to do in Frankfort, KY

The city’s theme is “Kentucky Distilled.” To visit Frankfort is to touch the heart of Kentucky. Some of the state’s greatest are honored in Frankfort. Besides the seat of government, Frankfort also offers art, history, parks, and fantastic food.11-Sept-2020

10 Best Places to Visit in Kentucky

The 12 Most Popular Things To Do In Louisville, KY

25 Best Things to do in Kentucky