An outdoor lover’s dream, Utah is home to some of the most extraordinary landscapes, scenery and views imaginable. While its ‘Mighty Five’ understandably attract the most attention, numerous other national monuments and must-see nature spots can be found all around the state.

Set in the Southwest of the States, it encompasses everything from arid deserts and enormous sand dunes to magnificent mesas, canyons and plateaus. Stupendous rock formations and elegant arches are also dotted about alongside rushing rivers and sparkling waterfalls. It is this rugged and varied terrain that makes Utah so interesting and exciting to explore.

Impressively enough, just under fifty fantastic national parks, monuments and state parks have now been established across the Mormon State. Of these, Arches, Bryce Canyon, Canyonlands, Capitol Reef and Zion are certainly the most popular national parks in Utah and with good reason too. This is because the Mighty Five all contain some absolutely spectacular scenery and offer up unforgettable outdoor activities.

Hiking, mountain biking and horseback riding all allow you to immerse yourself in its otherworldly landscapes while many of the parks are also perfect for camping and rock climbing. An adventure playground like no other, it is no wonder Utah is one of the top travel destinations in the US. 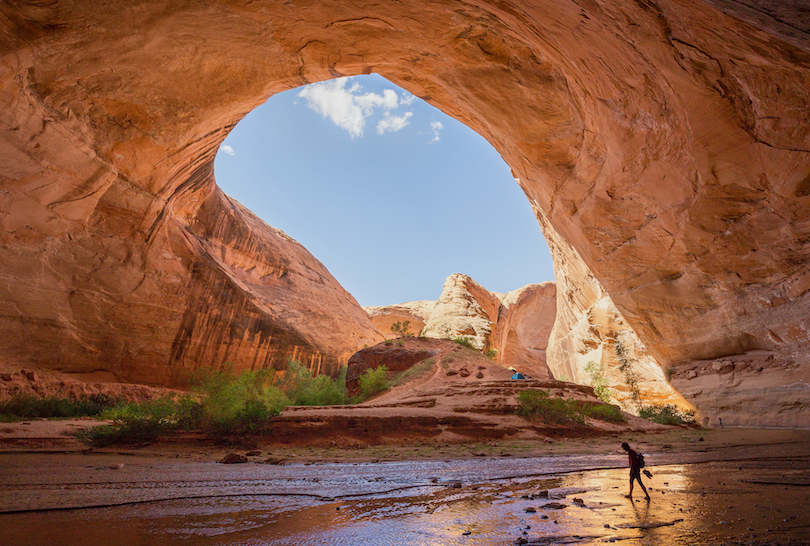 Sprawling across a huge area in the south-center of Utah is the Grand Staircase-Escalante National Monument. Formed over the course of millennia, its striking landscapes just beg to be explored and photographed with all kinds of exciting outdoor activities being on offer.

Protected as part of a park since 1996, it is named after its immense sequence of sedimentary rock layers that almost appear to form giant steps. Aside from taking in the incredible colors of its Pink, Vermilion and Chocolate Cliffs, there are also colossal canyons and epic rock formations to explore.

While many people who drive past on the way from Bryce Canyon to Capitol Reef simply enjoy its scenery through the window, it is well worth stopping off. Hiking and mountain biking about amidst its slot canyons really is a treat with stunning scenery and views on show wherever you look. 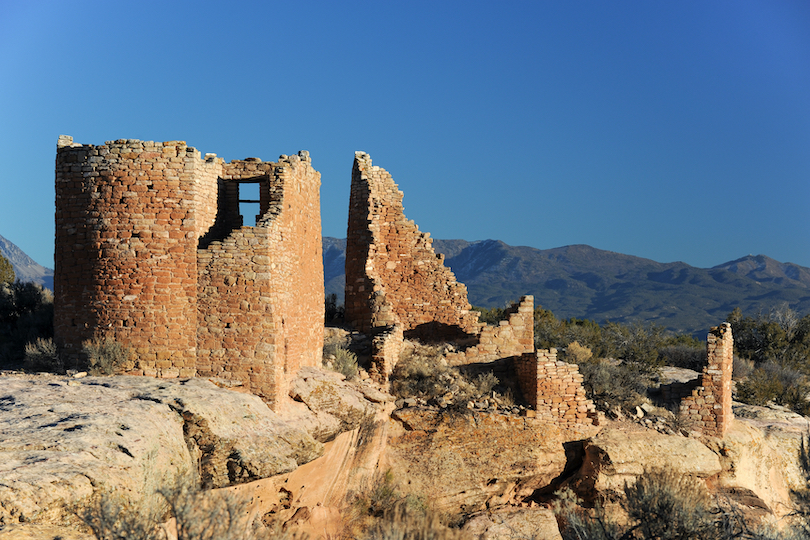 While most of its parks preserve vast swathes of untouched wilderness, a couple contain interesting historic sights or fascinating fossil beds. At Hovenweep National Monument, you can wander about the remarkable ruins of six Ancestral Puebloan villages dotted about the desolate Colorado Plateau.

Tucked away in the southeast of the state, its arid landscapes and haunting abandoned old buildings partly sprawl over into neighboring Colorado. Believed to have been built in the thirteenth century, their crumbling towers, castles and houses now make for some phenomenal photos, perched atop of canyon rims alongside sheer drops.

Although most come to see and explore its prehistoric villages, the scenery itself is just as attractive as massive mesas and winding canyons dot its confines. At its visitor center, you can learn all about the Ancestral Puebloans through its informative exhibits and engaging ranger talks. 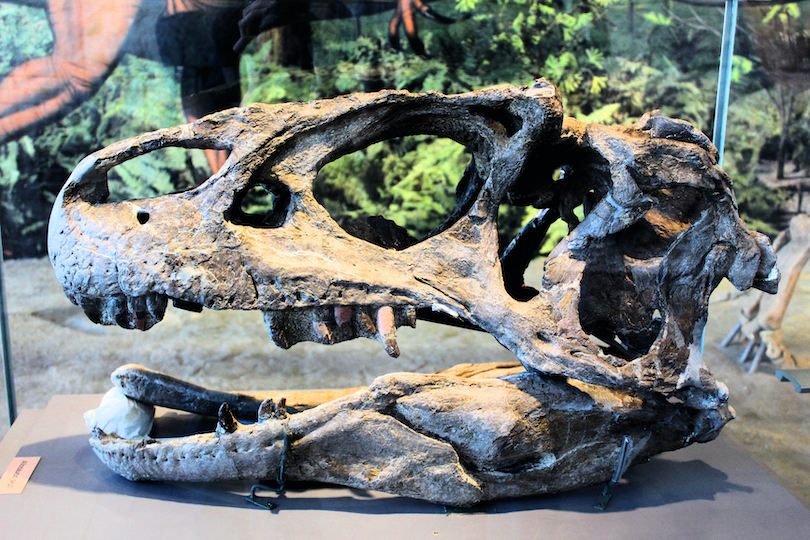 In a similar vein, the lovely Dinosaur National Monument is primarily known for its vast number of paleontological sites, petroglyphs and pictographs. Also straddling the Utah-Colorado stateline, its colorful canyons and rushing rivers can be found right in the northeast corner of the Beehive State.

Once the thousands of dinosaur fossils were discovered, the area was quickly proclaimed a national monument to preserve the special site. Since 1915, it has expanded to include the ginormous Green and Yampa river canyons which offer up some brilliant hiking, camping and rafting. Scattered about their slopes are amazingly old petroglyphs and pictographs left behind by the Fremont Indians.

The main attraction however is undoubtedly its Quarry Exhibit Hall where guests can see more than 1,500 dinosaur bones of numerous different species on display. Interactive exhibits cover the history and geology of the region, the dinosaur discovery and the national monument’s diverse nature. 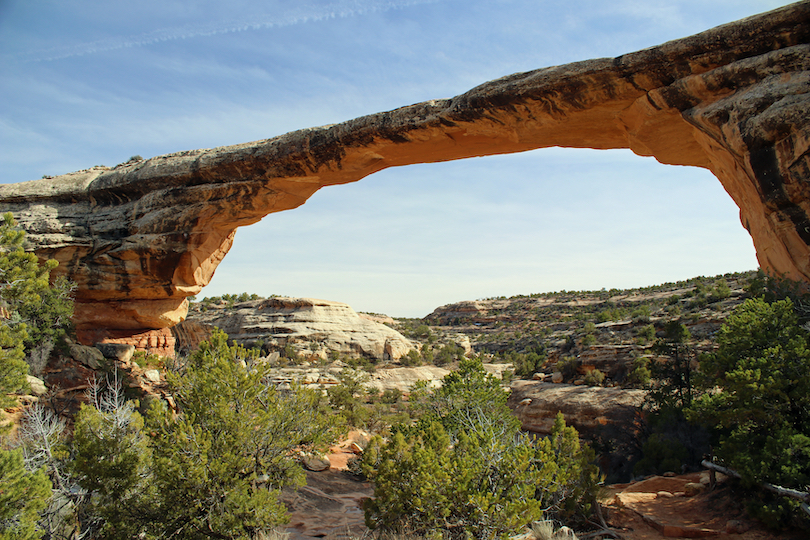 Just one of Canyon Country’s many unmissable parks is the absolutely breathtaking Natural Bridges National Monument. Named after the three stupendous stone bridges that lie within its boundaries, it has loads of outstanding hiking trails, campsites and viewpoints for visitors to enjoy.

Unlike many of Utah’s other outdoor areas, its defining landmarks are easily accessible as a scenic nine-mile loop road winds its way past the three bridges. The largest of these, Sipapu, impressively spans 255 feet in length with its elegant arch towering 220 feet above the White Canyon below.

Aside from snapping some photos of their silhouettes standing out brilliantly against the bright blue sky, you can hike about beneath them and camp overnight. It too houses a visitor center packed with exhibits and a small but superbly preserved Ancestral Puebloan ruin. 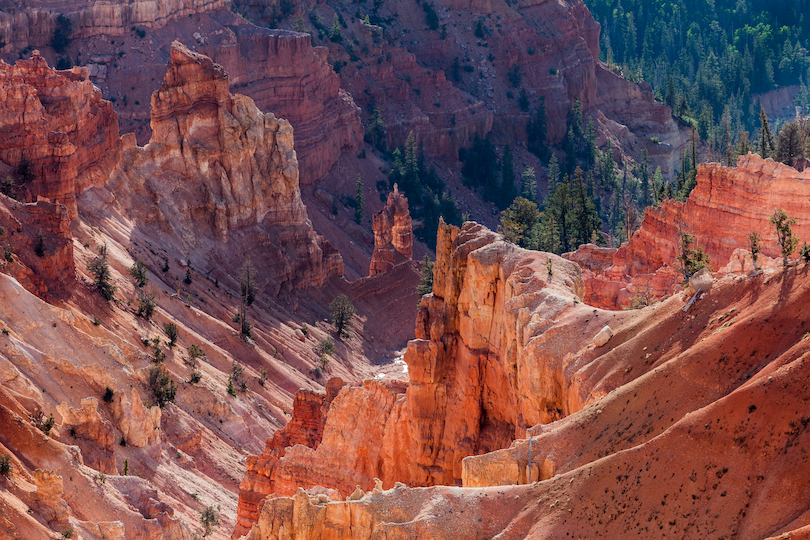 Although it is relatively small in comparison with many of Utah’s other parks, Cedar Breaks packs a hell of a lot into its craggy confines. Its astonishing natural amphitheater and steep, colorful cliffs overlook hundreds of haunting hoodoos and soaring sandstone spires.

Thanks to its staggering scenery and landscapes, it was declared a national monument by Franklin D. Roosevelt in 1933. Since then, generations have delighted in the astounding panoramas from its rugged rim which rises some 2,000 feet above all the intriguing formations down below.

As well as gazing out over them, outdoor aficionados can actually hike about the hoodoos and take up-close photos of their strange shapes and subtle shades. Some great camping can also be enjoyed at the park which lies near the west end of the Colorado Plateau, not far from Cedar City. 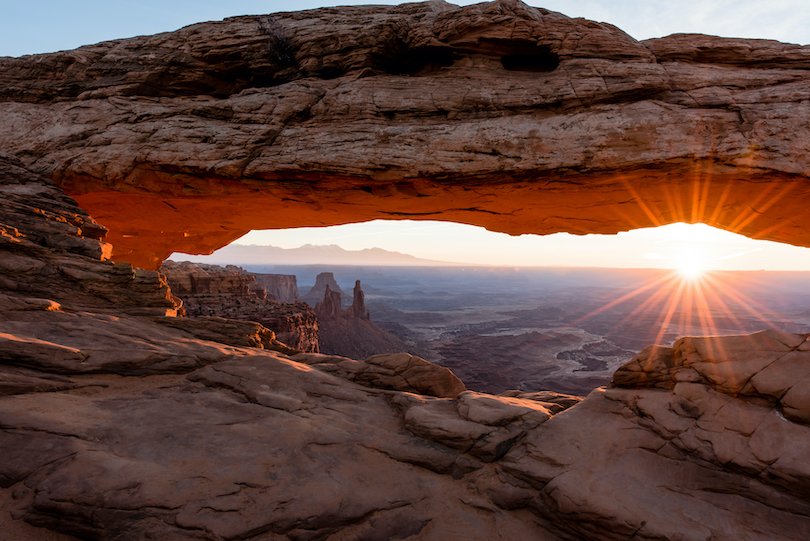 An absolutely incredible place, Canyonlands National Park is remarkably the largest and wildest of Utah’s Mighty Five. Set just southwest of Moab, it has four separate sections for visitors to explore, all home to awe-inspiring arches and mesas, buttes and spires.

Created in 1964, its snaking canyons stretch endlessly away towards the horizon with flabbergasting views on offer wherever you go. While Island in the Sky boasts the best panoramas, both the Maze and Needles districts have epic hiking and biking to enjoy. Its picturesque trails meander their way through its gaping gorges and narrow canyons and by dramatic arches and spindly sandstone spires.

Although most people associate Horseshoe Canyon with its phenomenal viewpoint, it also contains one of the most significant collections of pictographs and petroglyphs in the States. With so much to see and do, Canyonlands really is not to be missed when traveling around the state. 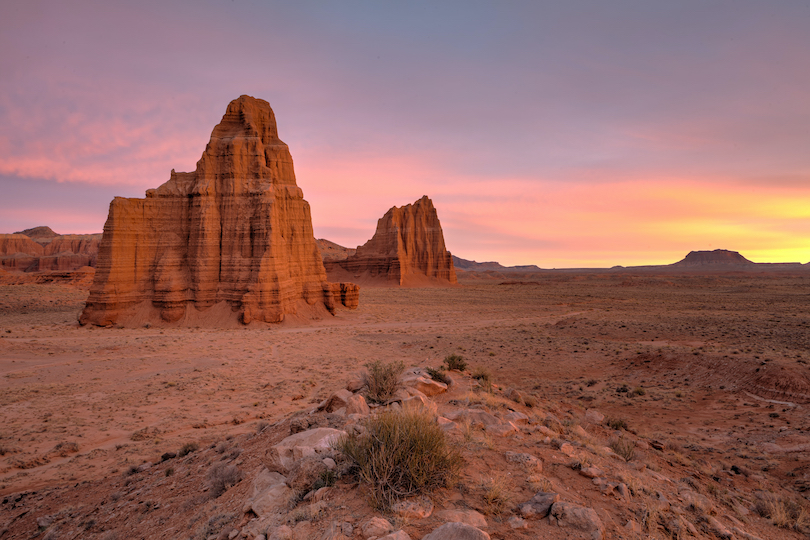 Also located within Canyon Country is the captivating Capitol Reef National Park. Established back in 1971, it protects a startling array of canyons and cliffs, buttes and monoliths with lots of exciting outdoor activities being on offer.

Centered around the Waterpocket Fold – a 100-mile-long wrinkle in the Earth’s crust – are all kinds of epic rock formations for nature lovers to explore. On show are not just towering sandstone cliffs and natural bridges but colorful domes and narrow slot canyons too. Aside from cruising along its rambling roads, you can get out and hike, horseback ride and camp amidst its wondrous landscapes.

In addition to seeing standout sights such as Cohab Canyon and Hickman Bridge, there is a historic old Mormon settlement and numerous petroglyph sites to stop by. At its visitor center, you can learn more about its history, nature and geology and take guided tours about its canyons. 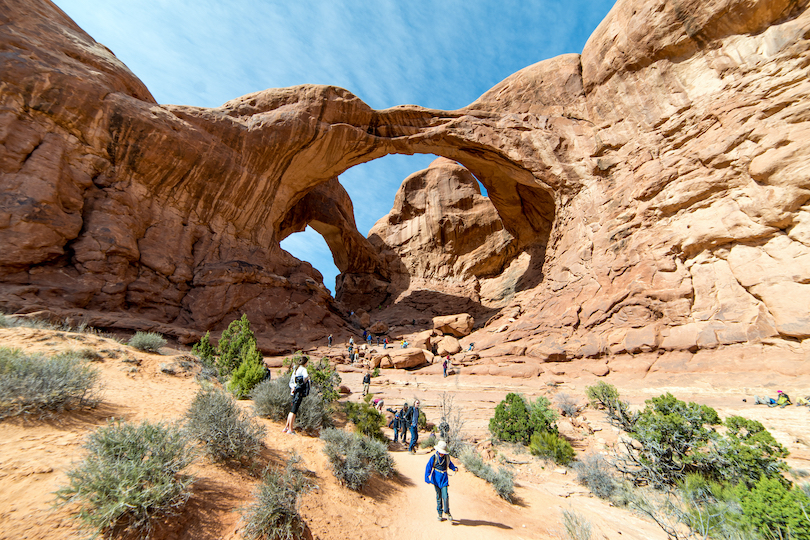 Even closer to Moab than the previous two parks is Arches National Park; one of the most beautiful places to visit in not just Utah but America. Home to the greatest concentration of natural arches on the planet, it impressively has over two thousand of them for you to photograph and view.

Formed over the eons by erosion, they make for spectacular sights as they arch gracefully above the weathered terrain about them. While some are small and slender, others are much larger with that of Landscape Arch stretching a ginormous 290 feet in total. One of its most famous and photographed landmarks though is the dainty Delicate Arch which actually features on the state’s license plates.

A paradise for photographers, its elegant arches are best viewed at either sunrise or sunset when the sun’s warm rays paint them all kinds of colors and light up the mountains in the distance. On top of this, you can also hike, mountain bike and rock climb around its arresting landscapes. 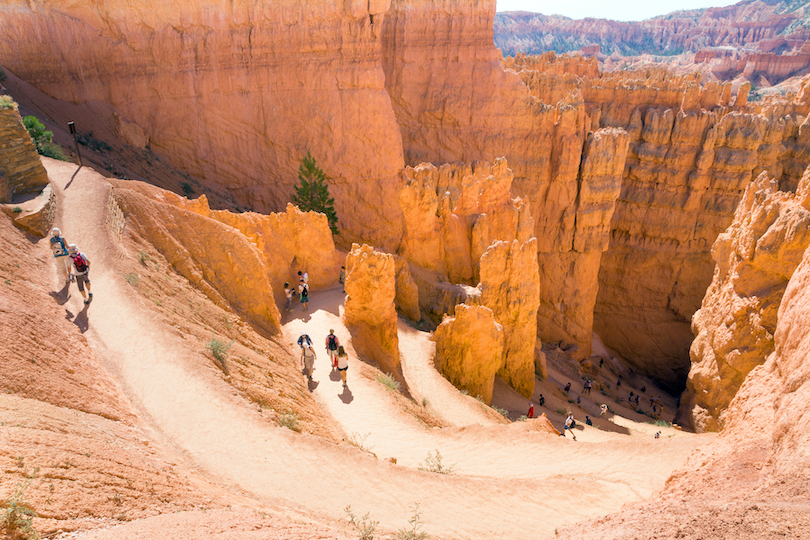 Rivaling it in terms of its striking scenery, nature and views is Bryce Canyon National Park in the southwest of the state. One of the most popular and picturesque parts of Utah to explore, it contains enormous eroded amphitheaters, colossal crumbling canyons and much, much more besides.

Founded in 1928, it protects the innumerable peaks and pinnacles that line the Paunsaugunt Plateau. These unusual sandstone spires and their bizarre shapes are fascinating to gaze upon with sweeping panoramas being on offer from atop of its rugged rim. Visitors can also hike about the hoodoos with black bears, elk and even mountain lions sometimes spotted in its remoter realms.

While most people just visit during the day, it is well worth camping overnight as the gigantic park boasts some of the best stargazing in the country. Scenic drives and nature trails also take you to lots of fabulous viewpoints overlooking the amphitheaters.

The crown jewel of Utah’s Mighty Five, however, has to be the neighboring Zion National Park. A place like no other, its sheer sandstone cliffs, slim slot canyons and sparkling waterfalls really need to be seen to be believed.

What makes Zion so special is that unlike many other parks in the Southwest, visitors actually walk along the canyon floor and look up at its 2,640 feet high walls towering overhead. While some trails take you through the cavernous Zion and Kolob canyons, other paths pass wild rivers, dramatic rock formations and precipitous viewpoints. Some incredible canyoneering, rock climbing and camping can also be enjoyed amidst its sprawling confines.

While geological wonders like the Great White Throne and Grand Staircase count among its major sights, all of Zion’s meadows, mesas and maze of canyons make it unforgettable to explore.

Map of National Parks in Utah